This land vests in the Ingonyama, King Zwelithini, as trustee on behalf of members of communities defined in the Act.

The Act was amended in 1997 to create the KwaZulu-Natal Ingonyama Trust Board to administer the land in accordance with the Act.

Perspectives from the HLP report

Research commissioned for the HLP noted a range of provisions in the Act intended to protect the land rights of Trust beneficiaries. The report highlighted a number of acknowledgements by the Ingonyama Trust Board that “the people living on the land have strong rights to use the land in various ways…” but recorded that:

…despite these statements and the protective provisions contained in the Ingonyama Trust Act, the Trust has been subject to a great deal of controversy for failing to protect the land rights of people living on the land it administers. The Trust has come under fire for its ongoing conclusion of long term surface lease agreements with mining companies, in terms of which it signs lease agreements with mining companies to enable mining activities on land which is often occupied and used by local communities. These agreements are sometimes concluded without proper community consultation and lead to the deprivation of use rights and access to land.  (Clark, M and Luwaya, N. 2017).

The report noted that the Parliamentary Portfolio Committee on Rural Development and Land Reform “have raised serious concerns about the revenue received by the Trust and the apparent failure on the part of the Trust to reroute its revenue back to the beneficiaries of the Trust” (HLP. 2017. p. 203).

The report of the High Level Panel noted that:

At the hearings people complained that they are currently more vulnerable to dispossession than they were before 1994. The problem is especially acute in areas where mining is taking place in former homeland areas, and in areas administered by the Ingonyama Trust in KwaZulu-Natal. People complain that traditional leaders and officials deny their land rights (including long-standing customary rights) and assert that traditional leaders have the sole authority to sign agreements with investors in respect of communal land.

The HLP recorded with concern that “the Ingonyama Trust Board has control over land in ways that far surpass anything the Minister of Rural Development and Land Reform has in all other provinces” (HLP. 2017. p. 274).

The HLP report confirms that the ITB has been converting the original PTOs into lease agreements with a 40 year term. It highlights a number of onerous conditions in the lease agreements:

The HLP noted that in the 2015/16 financial year the ITB received rental income of more than 96 million rand. The HLP report records that “there is little evidence” that this revenue “is used for the benefit of communities or their material well-being”.

An amendment to the Ingonyama Trust Act in 1997 removed land in R293 townships from the ownership of the Trust, vesting it in the relevant municipality. However the HLP report notes evidence that despite this amendment “the Trust has retained land in townships and is dealing with this land as if it were the outright owner” (HLP. 2017. P. 275).

In its recommendation the HLP motivates for “the repeal of the Ingonyama Trust Act… If repeal is not immediately possible, substantial amendments must be made. They must secure the land rights of the people affected, and ensure that the land vests in a person or body with proper democratic accountability. There is also a pressing need to create mechanisms to investigate and resolve complaints by people whose rights have been infringed by the Trust, or whose rights may be infringed in the future” (HLP. 2017. P. 277). 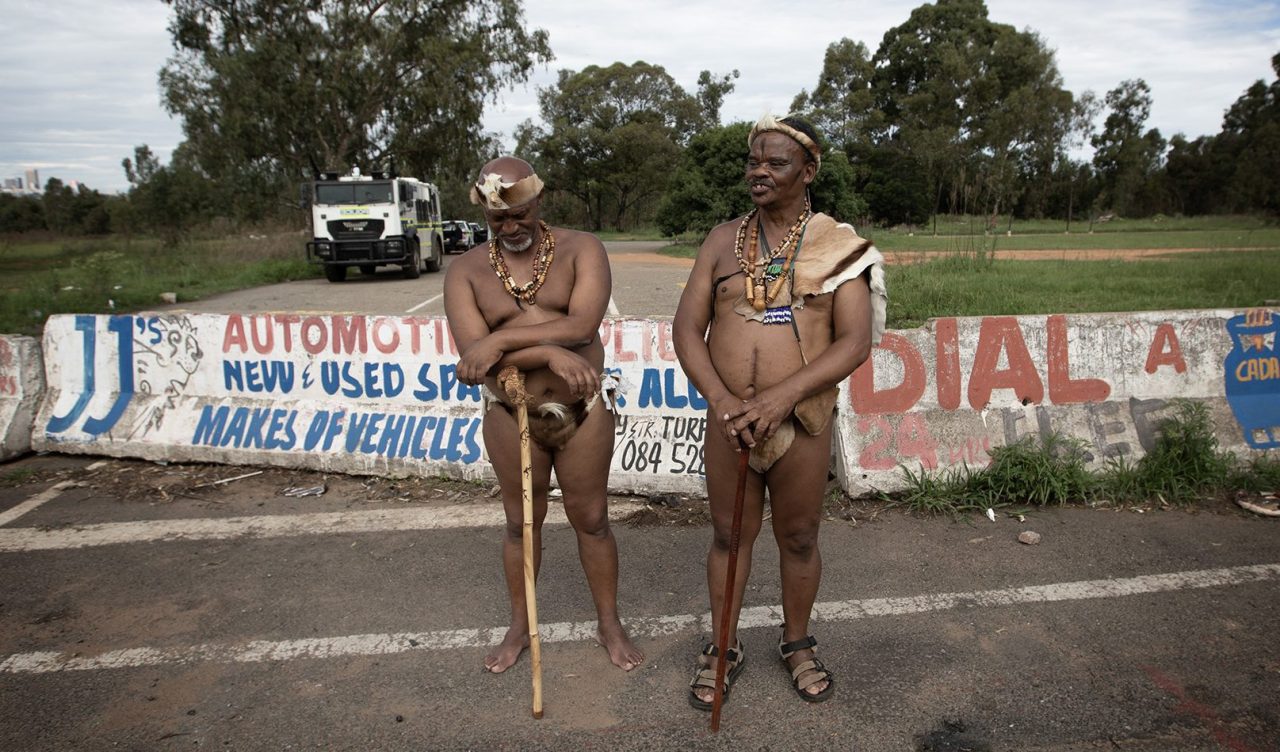 On the road to Nasrec: See us, hear us, demand Khoisan leaders

As thousands of delegates were deliberating and going about their business, two Khoisan leaders staged a lonely protest on the road to the conference venue for several days.

Inkosi Patrick Siphamandla Khumalo of the Amantungwa traditional council in Utrecht (eMadlangeni) survived the attempt on his life Wednesday evening.